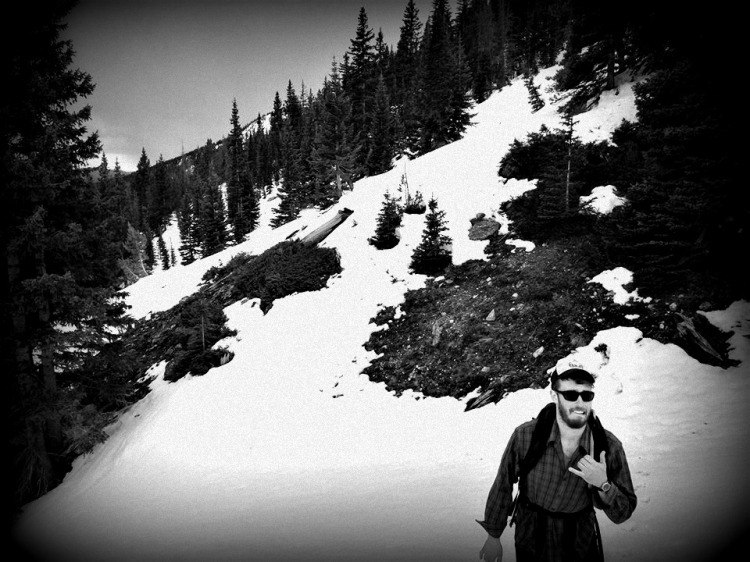 I was lying naked on a broad flat rock. My legs were sprawled out in front of me and my feet rested at the edge of the river. The water flowed steadily downstream inches from my toes.

Western North Carolina’s schizophrenic early-spring weather had treated me to a mild day. The wind was steady and strong, rustling the trees and bushes and sending ripples across the crystal clear water, but the sun still sizzled on my pasty pale white skin when the clouds didn’t drift in front of its glow.

Thousands upon thousands of years ago the little river had risen up over a set of boulders and came crashing down on to the terrain below. Years of water flow carved out a small but deep pool, deep enough for a person my height to be fully submerged.

I stretched a leg out and dipped my foot into the water. Goosebumps crept up my leg and the hairs on the back of my neck rose in unison. A couple hundred yards away I heard my group of wilderness students hooting and hollering around camp. When their voices faded and could no longer reach me through the trees and brush, I stood and took a single step toward the edge where solid and liquid met.

I stood in silence listening to the gurgle of the river’s flow. I looked to the sky, waiting for the sun to emerge from behind a cloud. As the big yellow ball revealed itself, I cupped my hand over my eyebrows to shield my eyes. My gaze shifted downward and I dipped my toes once more into the water, as cold as it had been moments earlier. I took a few deep breaths. My heart pounded against the inside of my rib cage. I felt the smooth granite surface on the heels of my feet. I closed my eyes and leapt off my rock platform. I took the plunge.

When I graduated college two-and-a-half years earlier I was working two shit part-time jobs (washing dishes and working a cash register at a grocery store) and had zero sense of direction. One fateful night at a university bar, a friend told me about a wilderness therapy program 60 miles south that needed bodies for the summer season. I had never been camping, let alone backpacking, in my entire life. My experience working with young people was minimal at best. Naturally, I applied for a position and received one. I took the plunge.

Two years and 380 field days later, I found myself naked on that rock.

Any attempt to capsulize that experience into words will fall miserably short. I traversed the Pisgah National Forest in the rain and snow and storms. I saw temperatures drop into the single digits and climbed over mountains while the temperature hovered upwards of 90°. I learned more about myself than I may have liked to know. I met both young people and adults from across the country and navigated crossroads alongside them. Maybe most importantly, many of these adults grew to be my closest friends.

Over those two years, a dozen-or-so of those friends moved on from our little outpost in Western North Carolina. Some traveled the world- Europe and South America and Asia. Others took to urban epicenters like Philly or Boston or Phoenix to pursue careers and graduate school. And others departed without a plan- ready to float through ether and embrace its endless possibilities.

It is these people, coworkers turned compadres, who inspired me to take another plunge. Today I sit in a Seattle restaurant, gazing out over the Puget Sound. I can count the souls I know in this city on my hands (I’ve met seven of them in the last week), but I have a place to rest my head (thanks to an old wilderness friend) and a new job waiting for me in the Cascade Mountains. I took the scenic route to get here, passing through the American cities I had always wanted to visit, and sleeping in the most glorious forests and parks the country has to offer. I did most of it solo. I left a full-time job and all of these friends (temporarily, of course). I embraced the old adage I had uttered at so many young people in the Pisgah- if you feel uncomfortable, or uncertain, or even scared, you might be doing something right. Three time zones, 15 states and 11,000 miles later I am fulfilled and vulnerable, ready to begin my next great adventure. All because I took the plunge.

Written by Ethan Woodhouse, an insightful, creative, and inspiring wilderness professional and friend.

Published by Fireflies and Jars

Hello! My name is Tracey Gerlach. Professionally, I am a Positive Psychology Practitioner and a Certified Therapeutic Recreation Specialist. Unprofessionally, I'm a doubting dreamer who's just trying to make every moment count. Follow along! View more posts